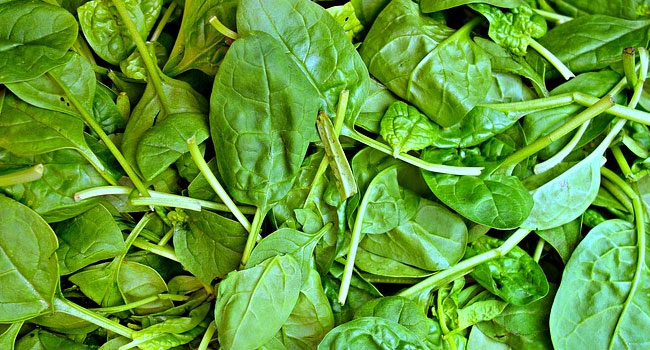 Spinach is a dark green leafy vegetable native to Southeast Asia. This crop has been used as a source of food for centuries in Asia, and it had reached Europe by the eighth century CE, ensuring that spinach would follow along on the ride to the New World. Most markets which stock produce of any form carry spinach, often year-round, and it can also be found in canned and frozen form. There are a huge number of ways to use spinach, and this green is extremely popular in many corners of the world.

- Spinach contains choline and inositol, the substances that help to prevent atherosclerosis or thickening and hardening of arteries.

- Spinach and alfalfa help stabilize blood sugar among diabetics. Make a drink by getting several handful of spinach, add 3 cups of water. Place over low heat for one hour. Then strain. Take ˝ cup twice a day. Spinach and alfalfa may be served as part of the meal.

- Spinach is loaded with flavonoid that functions as antioxidant and anti-cancer agent.

- Spinach is a rich source of Vitamins C and A

- Spinach is an anti-aging vegetable.

- Spinach is a good source of Vitamin K, which aids in the formation of the blood substance required for clotting of blood
Vegetables List