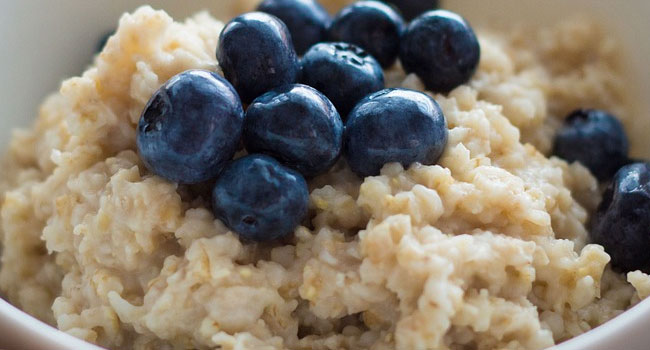 Oats, known scientifically as Avena sativa, are a hardy cereal grain able to withstand poor soil conditions in which other crops are unable to thrive. Oats gain part of their distinctive flavor from the roasting process that they undergo after being harvested and cleaned. Although oats are then hulled, this process does not strip away their bran and germ allowing them to retain a concentrated source of their fiber and nutrients.

Cholesterol and Heart
Benefits of eating oats on cholesterol and heart
Oatmeal and oat bran are significant sources of dietary fiber. This fiber contains a mixture of about half soluble and half insoluble fibers. One component of the soluble fibre found in oats is beta-glucans, a soluble fiber which has proven effective in lowering blood cholesterol. Here's how it works. Soluble fiber breaks down as it passes through the digestive tract, forming a gel that traps some substances related to cholesterol, such as cholesterol-rich bile acids. This entrapment reduces the absorption of cholesterol into the bloodstream. The bad cholesterol, LDL, is trapped without lowering good cholesterol (HDL). Oats and grains are also one of the best sources of compounds called tocotrienols. These are antioxidants which together with tocopherols form vitamin E. The tocotrienols inhibit cholesterol synthesis and have been found to lower blood cholesterol. The accumulation of cholesterol is implicated in many types of cardiovascular disease. Oats, like all cholesterol-lowering agents, are most effective when consumed as part of a low-fat, high-fiber diet taken together with plenty of exercise. The beneficial health effects of oats are best if ˝-1 cup (1˝-3 ounces) of oats are eaten every day. One study found that the 1/10th ounce (3 grams) of soluble fiber from this amount of oatmeal decreased total cholesterol by approximately 2%, which correlates to a 4% decrease in coronary artery disease. Another study showed 1˝ ounces (43 grams) of oatmeal resulted in a loss of 3% in total cholesterol and a 14% reduction in bad cholesterol after two months. Another study found that a 6-8 week diet of 1˝-3 ounces (43-85 grams) of oat bran daily lowered total cholesterol by 20% and bad cholesterol (LDL) by as much as 25%. Another study found 3.5 ounces (100 grams) of oat bran (one-third of a cup of oat bran eaten twice a day) lowered cholesterol up to 15%. New research has also discovered that the antioxidants found in oats reduce cholesterol by reducing the ability of blood cells to stick to the inside of artery walls. So in other words, eat a cup of oats a day and you'll be okay!

Blood Sugars
Benefits of eating oats on blood sugars
Eating oats can spread the rise in blood sugars over a longer time period. Control of blood glucose and insulin levels is essential in preventing many of the complications associated with diabetes. Oat beta-glucan slows the rise in blood glucose levels following a meal and delays its decline to pre-meal levels. Here's how it works. As the beta-glucan in the soluble fiber of oats is digested, it forms a gel, which causes the viscosity of the contents of the stomach and small intestine to be increased. This in turn slows down digestion and prolongs the absorption of carbohydrates into the