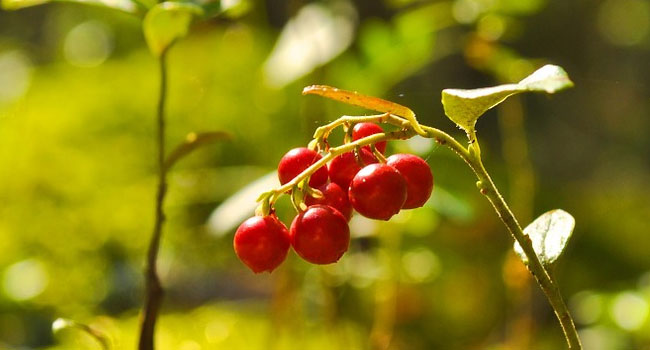 A glossy, scarlet red, very tart berry, the cranberry belongs to the same genus as the blueberry, Vaccinium. Like blueberries, cranberries can still be found growing as wild shrubs in northern Europe, northern Asia, and North America. When cultivated, however, cranberries are grown on low trailing vines atop great sandy bogs.

Cranberries have also been called "bounceberries," because ripe ones bounce, and "craneberries," a poetic allusion to the fact that their pale pink blossoms look a bit like the heads of the cranes that frequent cranberry bogs. The variety cultivated commercially in the northern United States and southern Canada, the American cranberry, produces a larger berry than either the Southern cranberry, a wild species that is native to the mountains of the eastern United States, or the European variety.

Urinary Tract Infections - Many people take cranberry supplements to prevent urinary tract infections caused by bacteria. Specifically, the proanthocyanidins found in cranberry appear to block the adhesive strands on the E. coli bacteria from sticking to a surface whereby inhibiting their ability to stick to the cell walls of the uterus and bladder.

Reduction of Dental Plaque - It is believed that cranberry juice can inhibit the aggregation of bacteria that cause dental plaque.

Anti-Cancer Activity - Based on evaluation of several vitro screening tests, it has been suggested that the proanthocyanidin compounds found in cranberry may exhibit some anti-carcinogenic activity.

Heart Disease - Cranberry extract has been shown to inhibit low density lipoprotein oxidation. Since this process is believed to be part of what can cause heart disease, prevention of oxidation through cranberry supplementation can potentially reduce the risk of heart disease.

Kidney stones - Some medical professionals and specialists believe that quinic acid abundant in cranberry may help to prevent the development of kidney stones.
Fruits List